While waiting for my Vitara to arrive from Hungary, I'd love to spend some time looking through the User Manual and any other hardcopy that comes with the vehicle. Unfortunately the Suzuki site requires the input of an appropriate VIN before softcopy download is possible - which of course I don't have.

Would anyone be prepared to copy me a VIN - via PM perhaps?

I can give you several vin numbers but just trying the service on the Suzuki site and got this.....

theforestdweller wrote:While waiting for my Vitara to arrive from Hungary.....

I called my dealer today to ask about delivery of my SZ5, I was informed the guy dealing with my car was on holiday and the girl said they had not had any delivery's of the new Vitara or any in stock......two hours later I drove past and guess what? 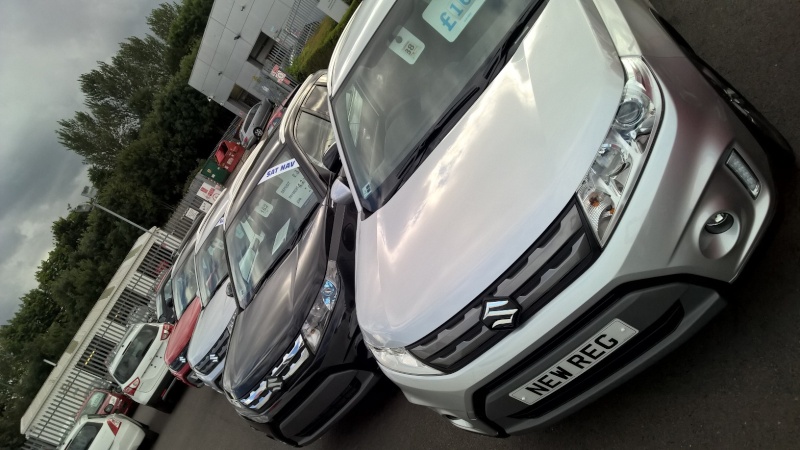 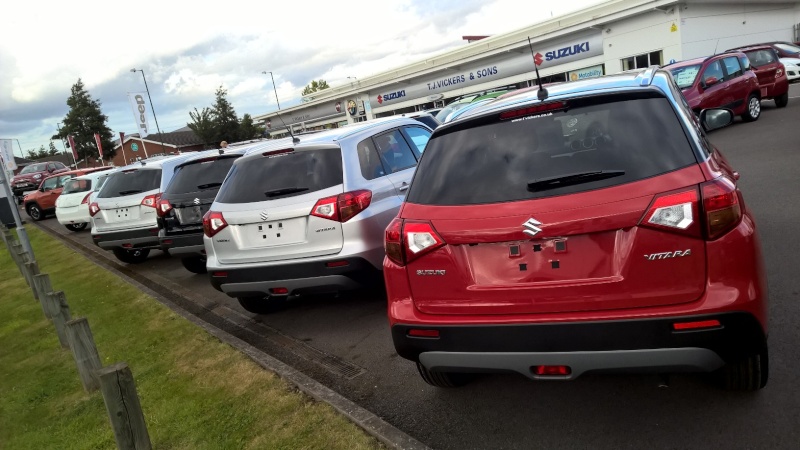 ....plus a further Orange SZ5 and a Black SZT in the showroom?

Mmmm - I got the same message with some of the VIN's I found (not our model) but also some that woked - primarily on the 3 door Vitara of old.

I'm waiting for a date when the auto is released in the UK. Suzuki web site now shows the auto but the two dealers closest to me says not on their list and can take no orders for them at this moment in time. Maybe I should look around the back and see if they are hiding in their compound

I have owned and still own many Suzuki's over the last 25+ years and never known such a delay in supplying vehicles, coming from Japan by sea you can understand but you would have thought Hungary would have been a more fluent supply within Europe
(not sure how the vehicles are delivered to the UK from Magyar but Rail and Barge are used for Germany/Holland etc)
It is a shame in some way that Suzuki has become more mainstream as they seem to have taken their eye off the ball, there was a time when a Suzuki dealer was in a small village/town, the dealers and staff knew their product and customers needs inside out, it is very rare that a Suzuki owner does not buy another Suzuki or their other half does not own one but something as simple as only having 4wd on the SZ5 Vitara shows they are no longer aiming for the rural/farmer community who does not really care for Leather, Sat Nav, Privacy Glass and a Colour Coded Clock surround

Subaru did a similar thing, the early 4wd's were a legend in Farming circles yet they followed their success in Rallying and left their roots behind, it now appears they are trying to regain some of that reputation with less sporty models like the Forester and XV

I don't even know who my dealer is! As a member of a Motoring Club I get a large discount on a  new car through one of the major lease companies, and it is through them that I have to deal. My order went in in Mid June. I was told 4 weeks for delivery. Then it was mid to late July. This became 5th August, and is now slipping into September.

Mine is a bog standard SZ5 diesel AllGrip in two tone paint - ie nothing that warrants any special attention. The PX value of my existing car with the leasing company was guaranteed until 25th July, since extended to August 25th - What happens then I don't know because values are depreciating all the time.

In my case I'm inclined to think that I'm getting pushed to the bottom of the queue each time someone turns up at the supplying dealership offering something closer to the list price.

I've bought in this way twice before through the same leasing company with no problems or delays - so I'm firmly pointing an accusing finger at the supplying dealership in particular and Suzuki in general for allowing bad practice to flourish. I may be wrong of course, but somewhere along the line there's a problem and I'm starting to think I may look elsewhere

Looking at the success across Europe it could well be there is a hold up with supply, at the end of the day we are the odd ball's and unlike the rest of Europe they can't just send us anything off the line as it has to be RHD?

From people I have spoke with who have had them there has been nothing but praise, I spoke to a guy this week who had swapped his Grand Vitara SZ5 DDIS for this SZT Vitara 2wd.... 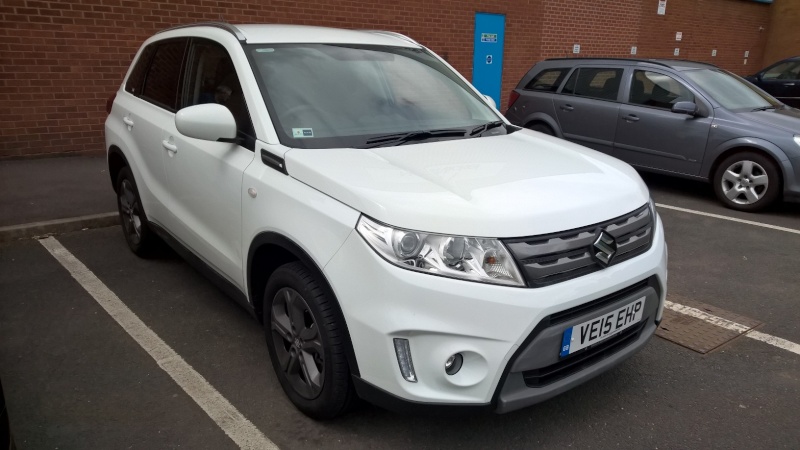 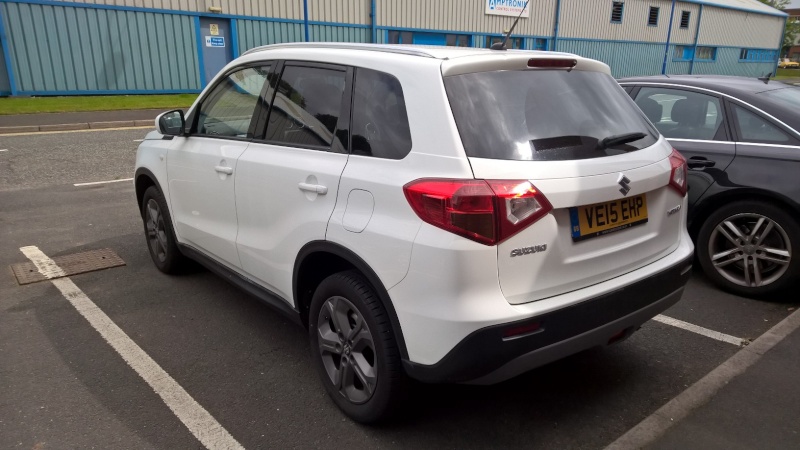 As you can see his MPG was quite impressive considering this was from bumper to bumper commuting that morning..... 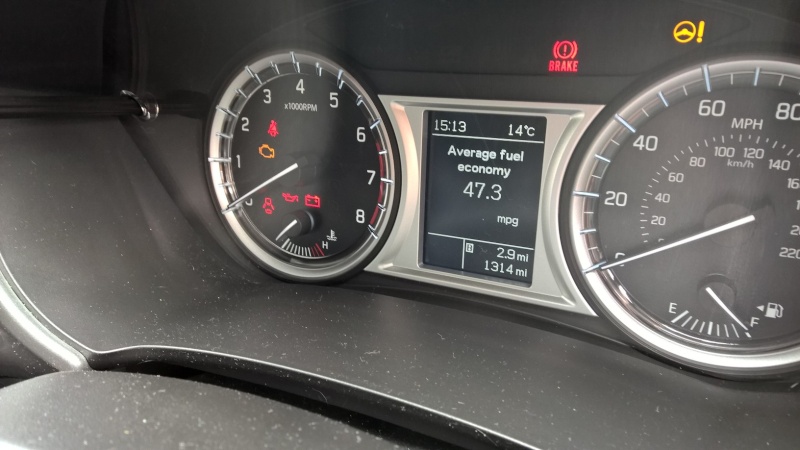 He then told me his wife who owned a Jimny had also px'd her car for a Vitara SZ3 as they were so impressed with the MPG, build and ride

Still trying for a Vitara owners manual PDF but in the meantime here is an S-Cross manual that is basically the same vehicle underneath so should give an idea of things.....

Thanks for that. Sincerely hope you can come up with the Vitara manual

I note the addendum on the Suzuki site regarding the (lack of) handbook download:

The message stating that the Vitara handbook is not yet available seems to have disappeared. Can someone with a VIN to hand try and see if the manual is actually available? If so, please may I borrow your VIN !

In the meantime - I sent you a PM as to how to get access to the manual.

Thanks feckinejiet - very good of you to take the time

Hi,
Have downloaded the manual but it does not include any info for the automatic gearbox, tried the Suzuki site but it did not recognize my vin, maybe because my car was supplied in Norway.
The manual I got with the car is in Swedish and has a lot of mistakes.
Is there anywhere I can download the English manual for the auto box.
Thanks
Bjorn