Since acquiring my SZ5, all has been well with the keyless entry system and I have even been able to lock the vehicle while in the house using the button on the key fob. The past 10 days though I have been having issues when it is parked outside the house in the drive. It would appear that something may be blocking the signal from the fob to the car as even though you are standing right next to the car and press the button on the handle (or try using the key fob) it takes a quite a few presses and re-positioning of the key fob for the car to lock/unlock. I initially though it must be getting interference from a wireless gadget inside the house (the car is parked around 6-8 feet from the back door so could be feasible) but I haven't purchased any new wireless gadgets nor have I moved any existing ones inside the house.

I have my 1st free dealership check-up on Saturday so I am going to see if they have any ideas about what could be the cause, along with the question 'where are my 4 x boot ties down points?'

Has anyone else had any similar issues? 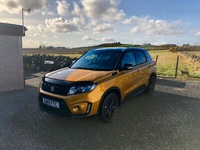 The batteries do not seem to last very long from experience. That would be the first port of call.

Battery size is CR 2032. Most dealers will just pop a new set in for free if the car is that new.

When taking the vehicle in for the 2000 mile check, remember to take both keys in with you so they can offer up the differences between the two.

Thanks Gargreen. I hadn't even contemplated batteries as I forgot to mention, this is only happening outside the house when parked in our drive.

The other half was away in it yesterday and said locking/unlocking worked first time, every time. When she got home she tried locking it again and would not lock when parked in the drive. Must be something locally affecting it when parked in our drive, just annoying not knowing what

An interesting one that. On my previous car SX4SCross I had exactly the same issue, but only in the same place - the car park at Llanelli Scarlets Rugby Club. I always have the same parking spot and it is close to BBC TV outside broadcasting vehicles, and also a couple of ambulances.

Obviously these vehicles have mega electronics which effects the system. I could lock the car with the key fob without problem, but not at all using the door button. I was ok unlocking with the key button, so never really worried about being locked out.

My Vitara however, has no issues like this. As it is possible to open and close locks from 50 meters or more, your problem may be down to some electronic device your neighbour(s) have bought.

A friend of mine had a similar issue, his car's remote would not work on Tuesday mornings when he left for work yet fine any other day or when returning from work where he immediately put the car in the garage
After several Road side call outs it urned out a local guy was a radio ham who had Tuesdays off and woke early to talk to people the other side of the world and his radio was interfering with his remote locking:shock:

Interesting reading folks - thanks for the input!

Reading this thread has reminded me of a story.

I was chatting to Jim the next door neighbor the other day and he was telling me that he has been getting "bobby knockers" pretty much every day for the past year and couldn't work out who it was or why they were doing it to just his house. It would happen at all hours from 8 in the morning to 9 at night, 2 in the morning and so on. All around the clock his door bell was ringing and by the time he had got to the door no one was there, now, I can see how this would get very annoying and he set out to find out who these pests were.

Trying to get to door quick failed because he could still see anyone. Imagine this for a year....
Searching up and down the street failed as there was no one to be seen. This happened so much Jim and his wife started to live with it and continued getting annoyed constantly for the rest of the time…

As he was telling me to the story Jim said that every time it happened my car was either on the drive or he could just catch it out of the corner of his eye going around the corner to the main road, now he thought nothing of this but it was a constant occurrence.

Time had passed and it was still happening until one day.....the day I brought my new Fiesta Zetec-S home, it was gone, no more door bells at un-godly hour’s no more messing round with getting to the front door quick. He couldn't understand why it had stopped after such a long time. But jim had worked it out, it was me all along.

His doorbell was wireless and my Corsa C (at the time) obviously had remote locking.......which we on the same frequency. So every time I opened my car "DING DONG" went Jim's door bell and in turn every time I closed it, rest assured Jim's door bell would chime that sweet tune.

But what made it even worse was, if you press the open button once only the drives door would open, it had to be pressed twice for the other door and boot to be un-alarmed, and the same with locking, once to lock, twice to dead lock, so because I was pressing the button twice each time good old Jim had a double ding dong ring through his house.

Mystery solved, but a nice tale to go with it.

Yes I have experienced that as well. When you buy those cheap and nasty electronic door bells, you have an option of one in three settings for the signal. If this problem occurs you have two alternative choices. When it happened to me, the house on the same frequency as me was 100 meters away. This is not something to buy if you live in close proximity to other people, such as blocks of flats.

As regards the radio ham, and warnings to owners not to use a particular car park, I will say that when I experienced this problem on the S Cross, it only occurred when using the button on the door, and not the key fob. So for me, I never had the worry of being locked out of the car. There is of course also an emergency key that hides away in the fob as an added protection.