Sorry this is not Vitara specific. Whats the general consensus on mixing manufacturers tyres on one axle. I recently bought a 2ltr MX5, when I gave it an inspection at home found one rear tyre to be a Pirelli rather than the Bridgestones fitted as standard, similar but different. Phoned dealer where I purchased the car & got the runaround, perfectly safe blah blah blah got nowhere. I know the MX5 isn't a supercar power wise but is a 180bhp rear wheel drive roller skate. For peace of mind I will change the odd one at my expense, am I being an over cautious pedant or sensible.

All the major tyre fitting companies state same type of tyre on one axle but not law only advisory barring crossply/radial on same axle. Common sense tells me different manufacturers use different compounds & belting not to mention tread patterns, this has to make them react differently under extreme acceleration braking & cornering surely.
Only going through this as I retired from motorbiking, at 72 with dodgy knees & back decided to sell bikes & needed a new toy

Personally I would change them both.

Odd Pirelli appears to be virtually new, tempted to change tother side to match, leaving me two Pirelli at back & two Bridgestone at front. Know what your saying but Bridgestones only have 3.5k miles on so hardly knacked.

Tony's here wrote:   All the major tyre fitting companies state same type of tyre on one axle but not law only advisory barring crossply/radial on same axle. Common sense tells me different manufacturers use different compounds & belting not to mention tread patterns, this has to make them react differently under extreme acceleration braking & cornering surely.
Only going through this as I retired from motorbiking, at 72 with dodgy knees & back decided to sell bikes & needed a new toy

I thought the tyres looked a little low (px) when i bought it, however i just topped up the air at the first garage on the way home.

On my first drive to work a day or so later i nearly lost it at low speed going through some tight S bends on a damp morning, the dynamic stability system kicked in and saved my bacon.

I found on closer inspection i had a slow puncture in one tyre, all 4 tyres were different brands and all were about 6 years old !

Changing the tyres had the most dramatic effect, they weren't the most expensive tyres out there, however after looking at several reviews i chose them due to wet braking and stopping ability, i have not been disappointed.

I would consider putting them on my Vitara too, when the noisy Conti's wear a little more.

Maybe check out some online reviews and then put your best 2 tyres on the rear axle, most accidents are caused by folk 'losing' the back end... even more so in an MX-5. 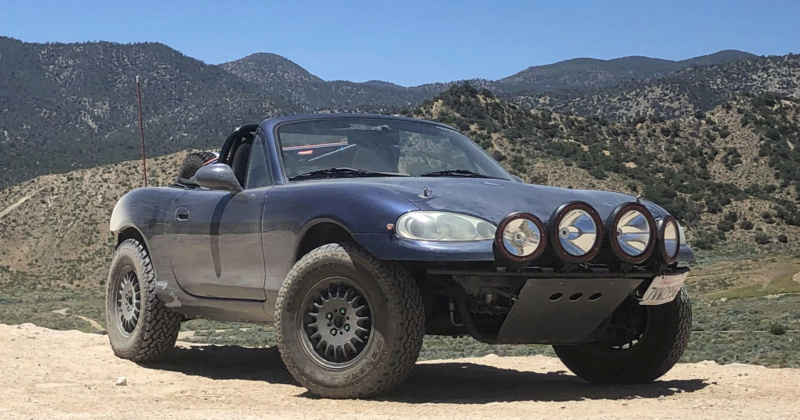 Am going to sort it it's just a case of choosing Bridgestone to match all round or Pirelli to have virtually new pair on back. P#ssed off with dealership as for the sake of a  £110.00 tyre on a £20,000 sale price they would have had  happy customer instead of a disgruntled one. Lost my custom in future plus any service work etc.

Kwikphix, we had a pair of those Goodyear's fitted to our 1.4S just before lockdown, not used the car much since then but it does feel more planted to the road and like you say the wet braking reviews are a plus.

Hi JDVitara,
Do you think the Goodyear's are any quieter than the OEM Conti's on your 1.4S ?

I have tried Michelin Cross Climate on a Fiat Sedici (SX4) and they were nice and quiet so they will be on my shortlist too.
Mind that the Conti's seem to be stubbornly wear resistant...

I think the Goodyear's are quiet a bit quieter than the OEM Conti's.
We went for a good long drive yesterday, my first time behind the wheel since March, into the Lower Dales near Harrogate, and to me the noise levels were better (lower) than I remember.

Having said that I think a lot depends on your individual driving style and the type of road surface materials.
I'm classed as a steady driver with no-need for speed.

Also, ever since I nearly had 'an off' in a brand new MK 1 Escort 1300E with Pirelli's (1970's) on wet smooth tarmac, I quickly changed them to Goodyear's and every other car I've had since then if they needed new tyres I'd have them fitted again, apart from a BMW M635 CSi which had the Michelin metric tyres fitted.

Good luck with the Mazda.

Have been more than happy with the Bridgestone Allweathers I had fitted to my Vitara 9months ago. Quiet & compliant over our pot holed pocked roads also instilling confidence with grip on bends. There may be better out there but it can only be marginal, they were discounted at Halfords & for the price I paid would happily fit again if & when the need arises

I had an MX5 several years ago, and a nice motor it was indeed. Mine was nearly new and tyres were never an issue. However, I would never even consider mixing tyres; and for that matter that includes replacing just one tyre on an axle, so that you had a situation of one brand new tyre on one side, and an almost worn out one on the other.

With regard to the MX5 the three Bridgestone's only have 3.5k miles on them so don't feel replacing the odd Pirelli is a major issue, not sure if it was the previous owner or the dealership that fitted the odd tyre but with all the given wisdom seemed a strange decision to make. It would appear most of the posters on here consider mixing manufacturers on one axle is a no no so backs up my original thoughts. Pity I was unable to convince the dealership to provide a replacement but my short term cost will be their longer term loss as I will not use them for purchase or service again or recommend them. By the way they are the Mazda main dealers in Huddersfield if I didn't mention it.