Just about to fit some flexi mudflaps #6 to my Vitara as the solid ones I have on my GV tend to catch off road and the angular shape #5 was not really to my taste....then browsing the Russian accessories brochure I found these rounded items #4... 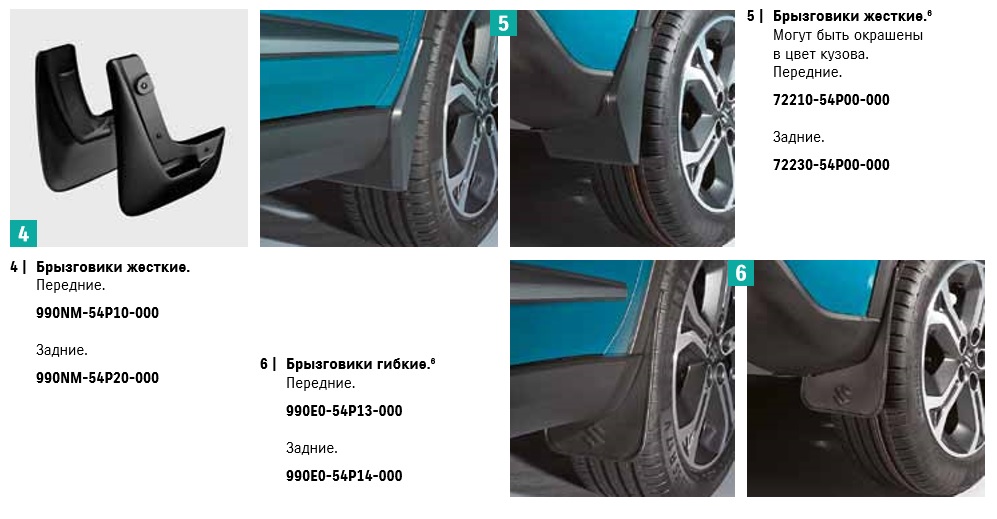 A quick google search suggests they are genuine Suzuki yet made in Russia, the flexi mudflaps in the European brochures are made in Austria and not listed in the Japanese Escudo accessories

Those Russian ones look a lot better than the clunky ones on offer in the UK. Having had the flexible ones fitted before delivery I am very happy with them.They are very unobtrusive and look like an OE fit rather than an aftermarket monstrosity

I will probably fit mine tonight, like you say they are a lot more subtle than the angular rigid ones

Hi Karl, did you ever get the mud flaps fitted? I'm looking to get the flex editions, but tbh I have nothing against the angular version suzuki offer. Might change my mind when I see them IRL of course.

How is the fitting of the flexi versions? Any drilling involved?
I asked my dealer but they take the same price to fit the flaps as the flaps themselves cost. I figure it can't possibly be that hard a job to fit...

There is a little drilling involved.

I've looked at the instructions on the flexible mud flaps, and from memory you have to drill holes in the flaps themselves (they are not predrilled) and for the front there is one drill hole required and the rear maybe two or three into the vehicle.

I can scan the destructions and post them here in a day or so. I've not done the install yet but it claims less than 30 mins install per pair.

Fitted mine last week. quite straight forward. You have to drill 3mm pilot holes in the mud flaps using a paper template as a guide then enlarging the holes to 6mm.
The most difficult part was moving the front wheel arch liner out of the way to fit the spire nuts.
Only four holes have to be drilled in the plastic bodywork.
All four wheels have to be removed.
It took me more than a couple of hours but I am a grumpy OLD man.
GS

Ahhh, Thanks for that GS, I was wondering what the 3-6mm meant. Makes sense now.

Here are the front destructions. 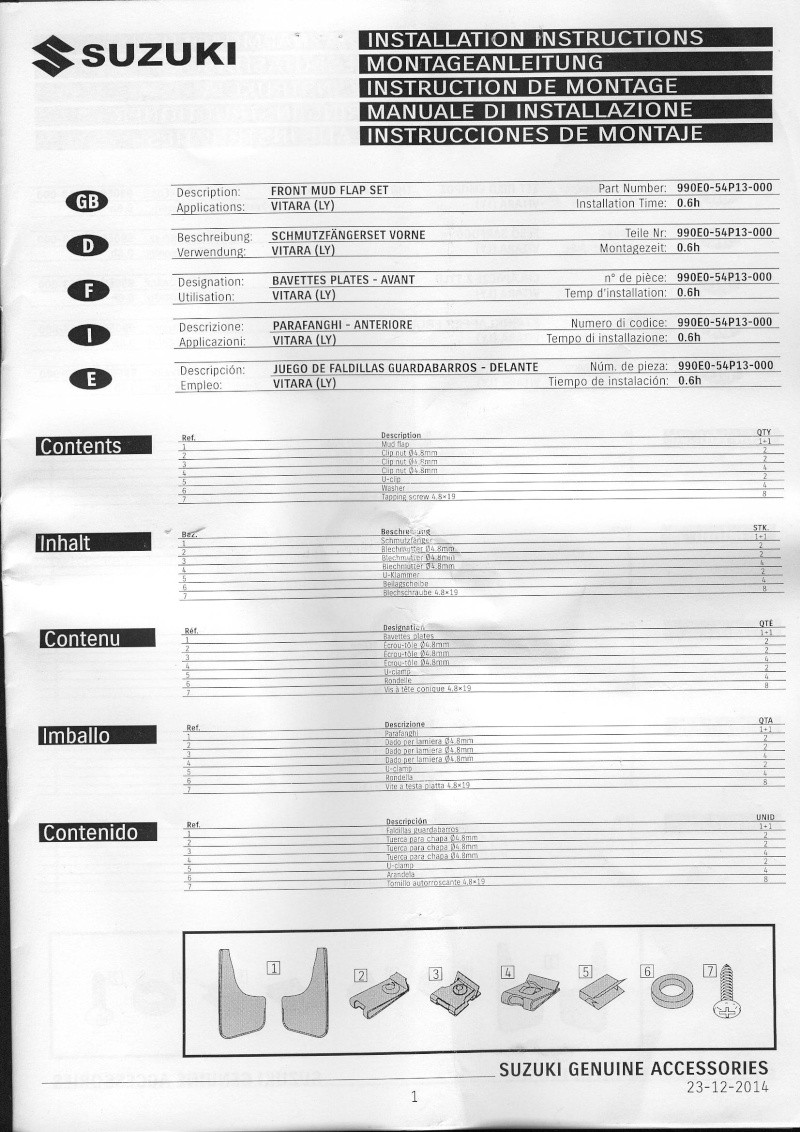 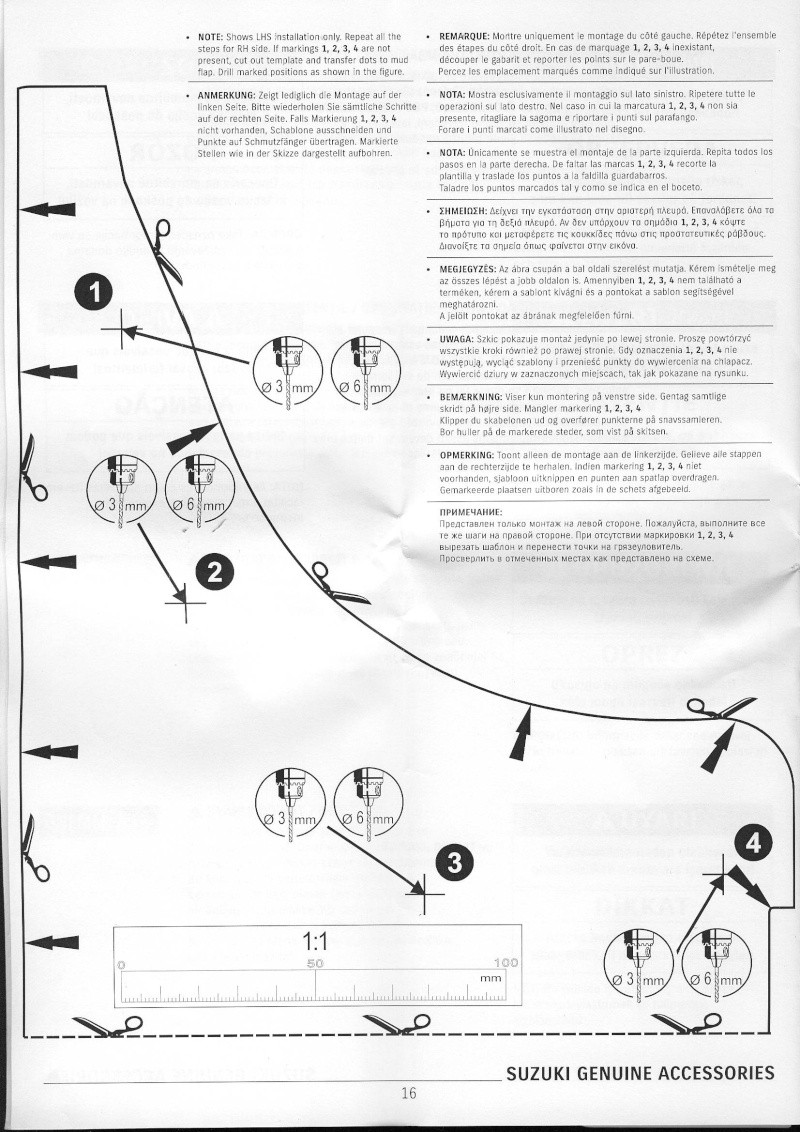 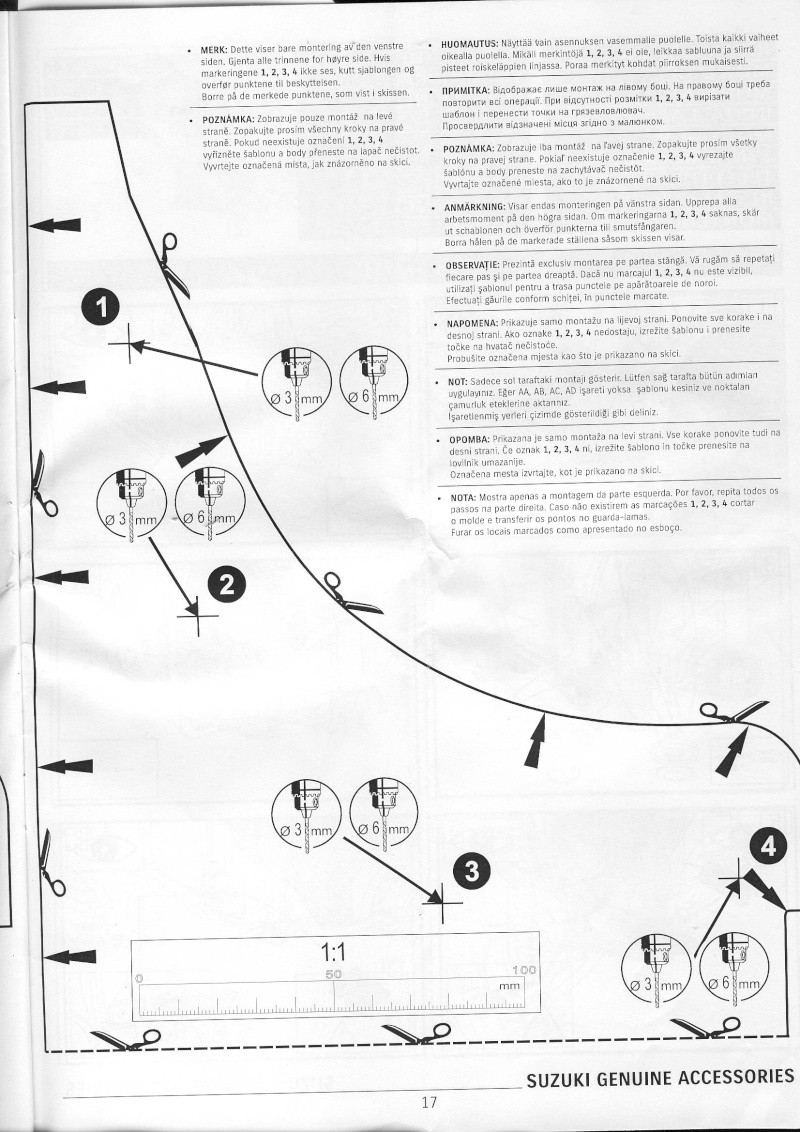 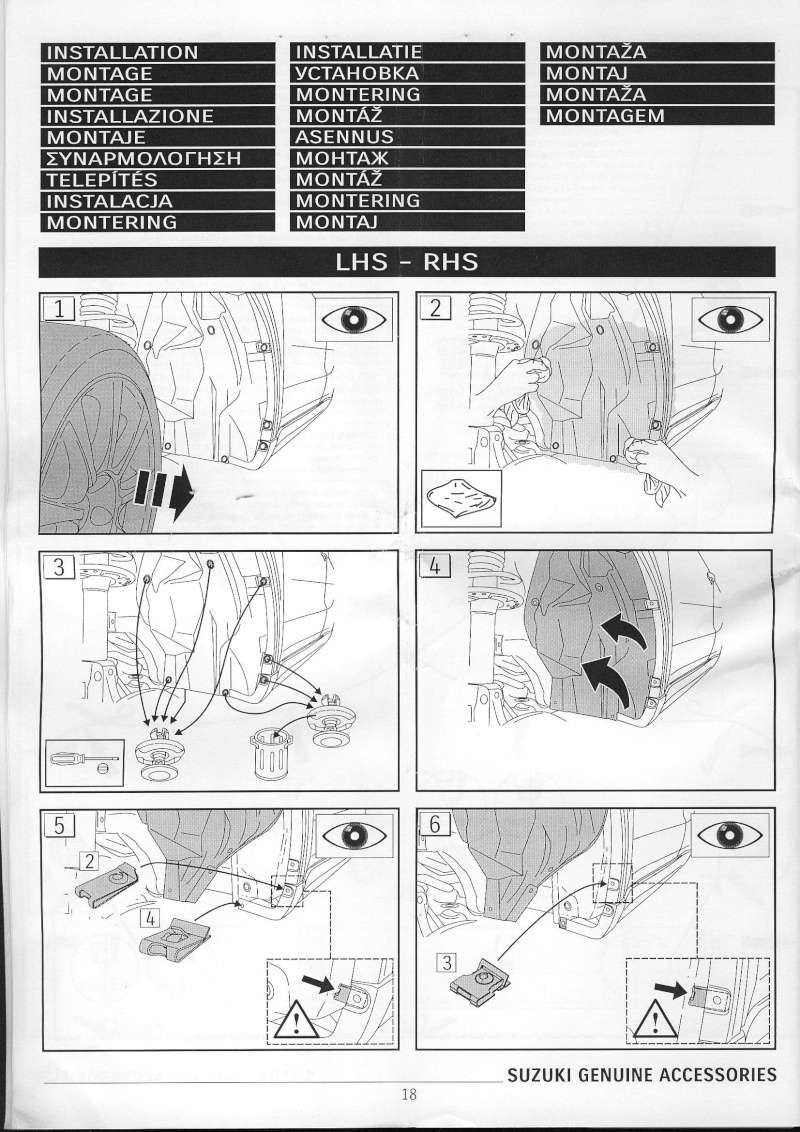 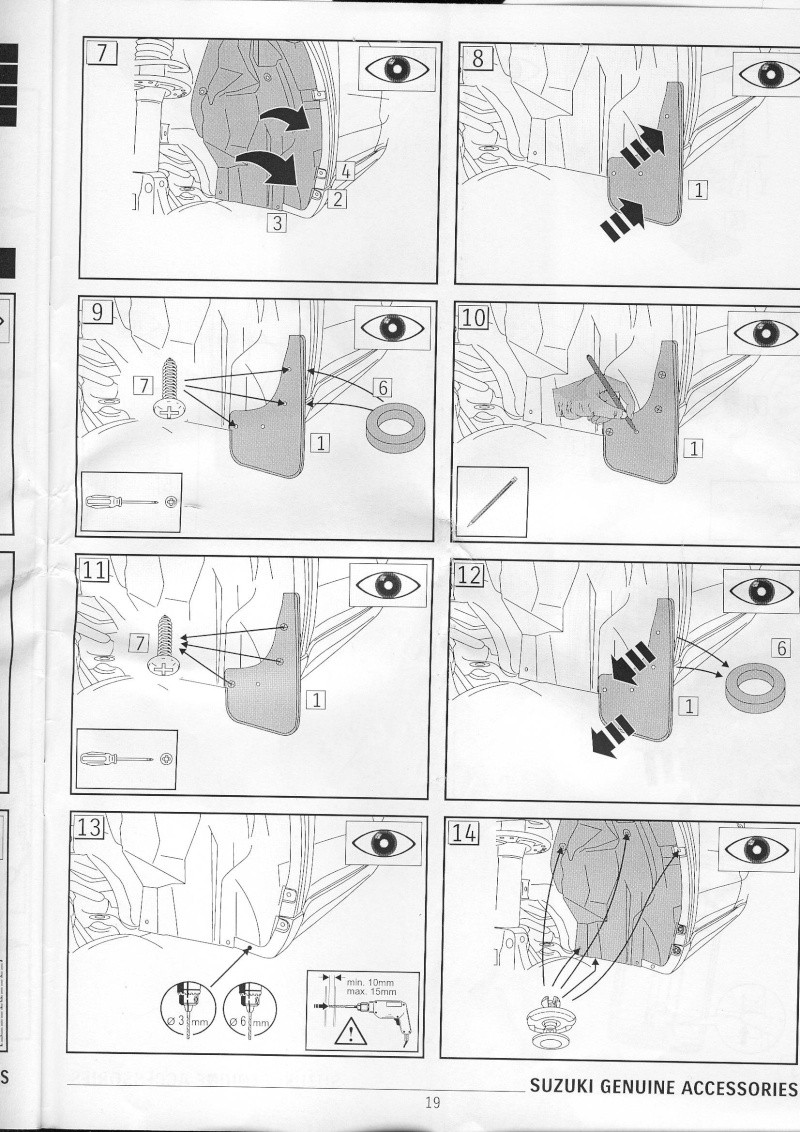 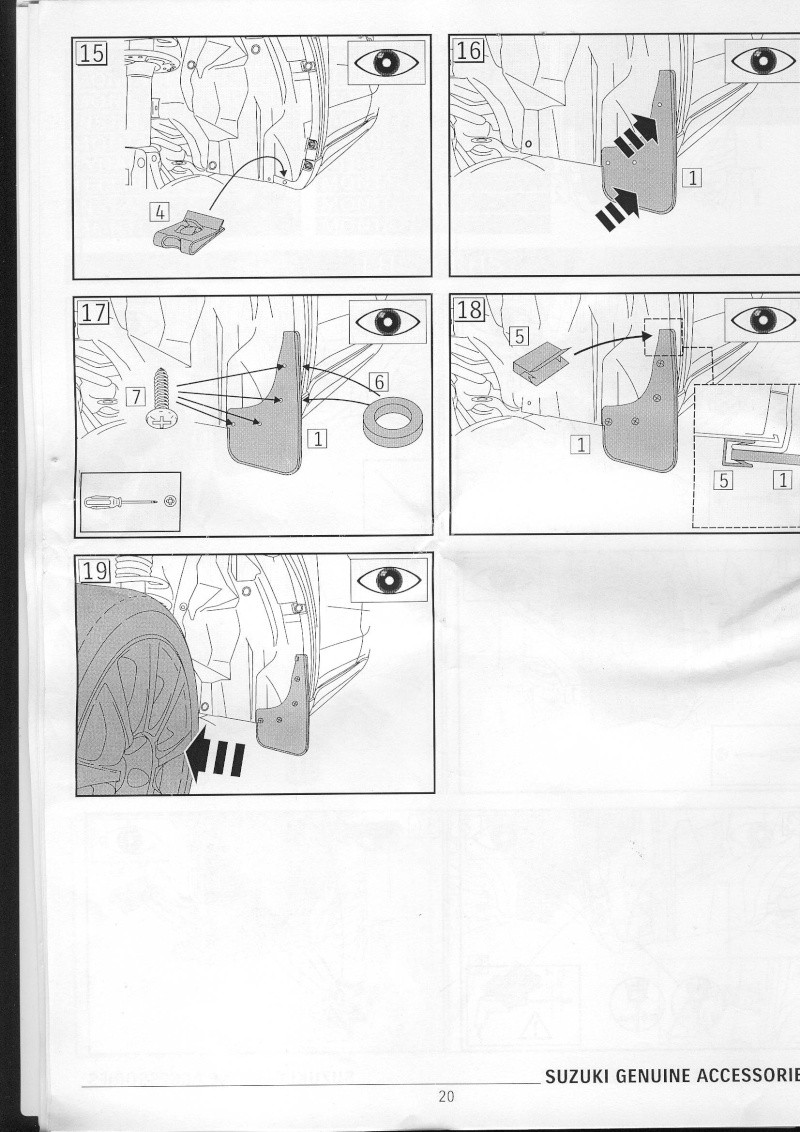 And the rear destructions 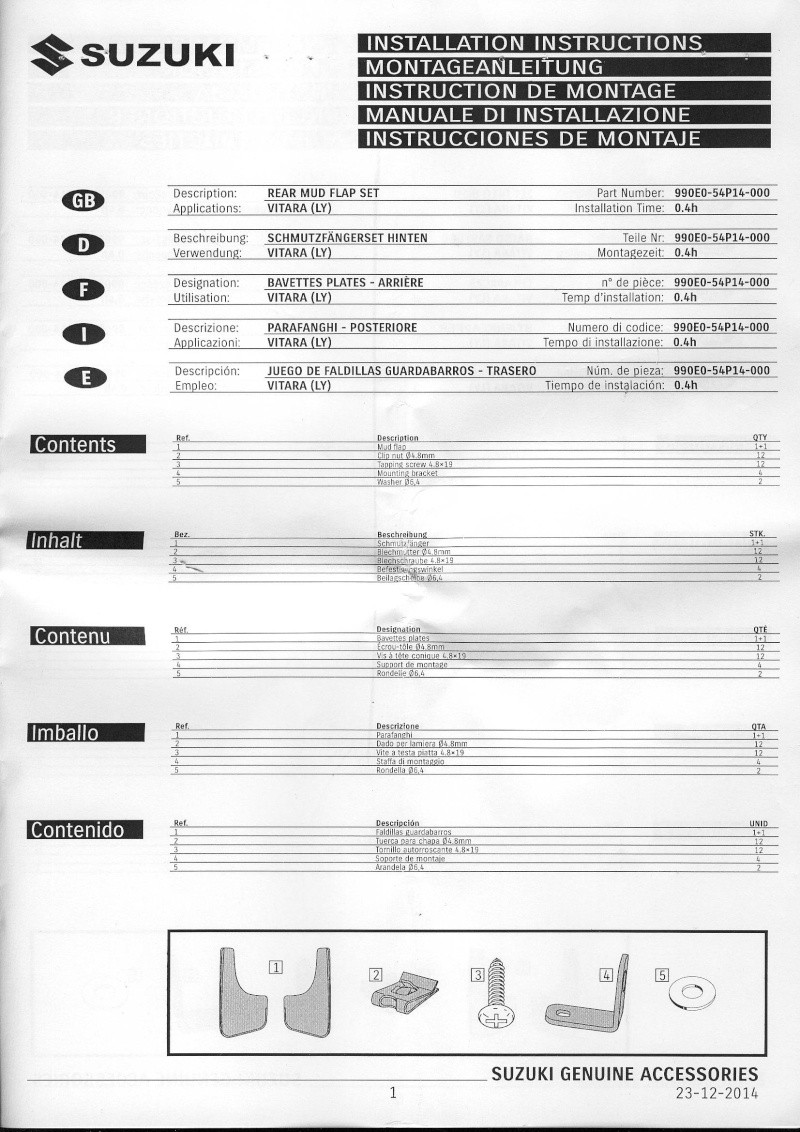 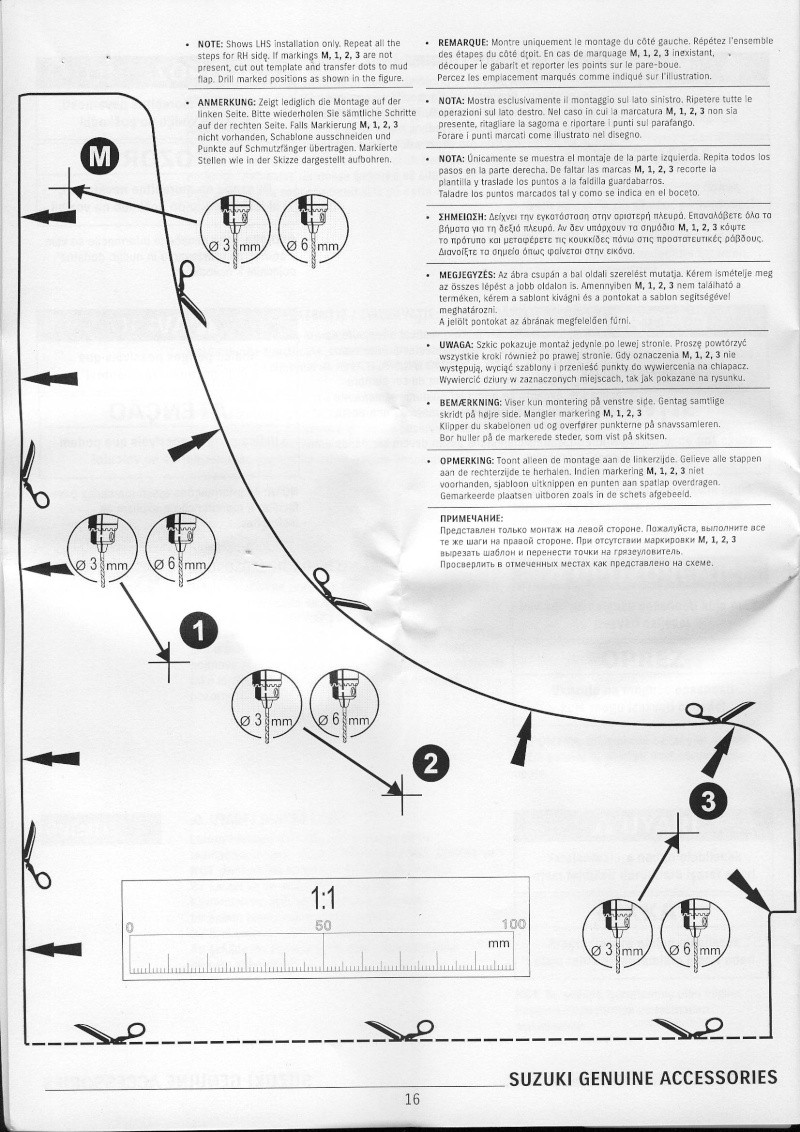 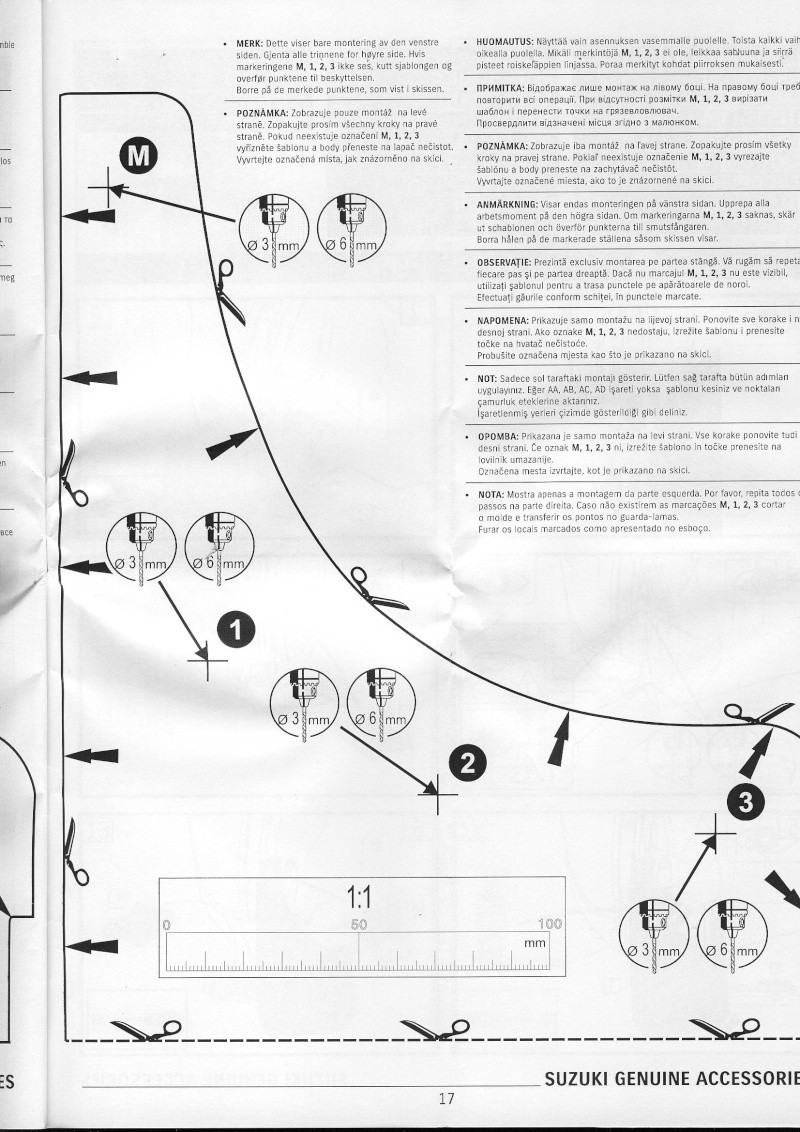 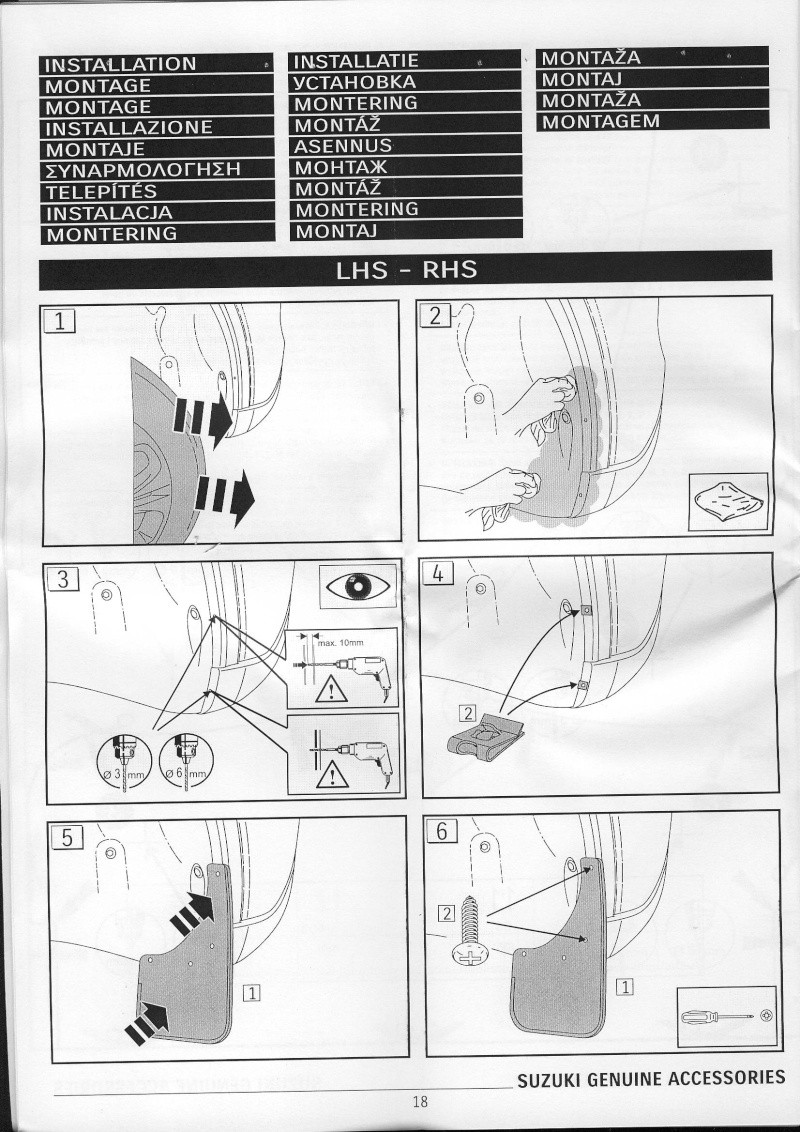 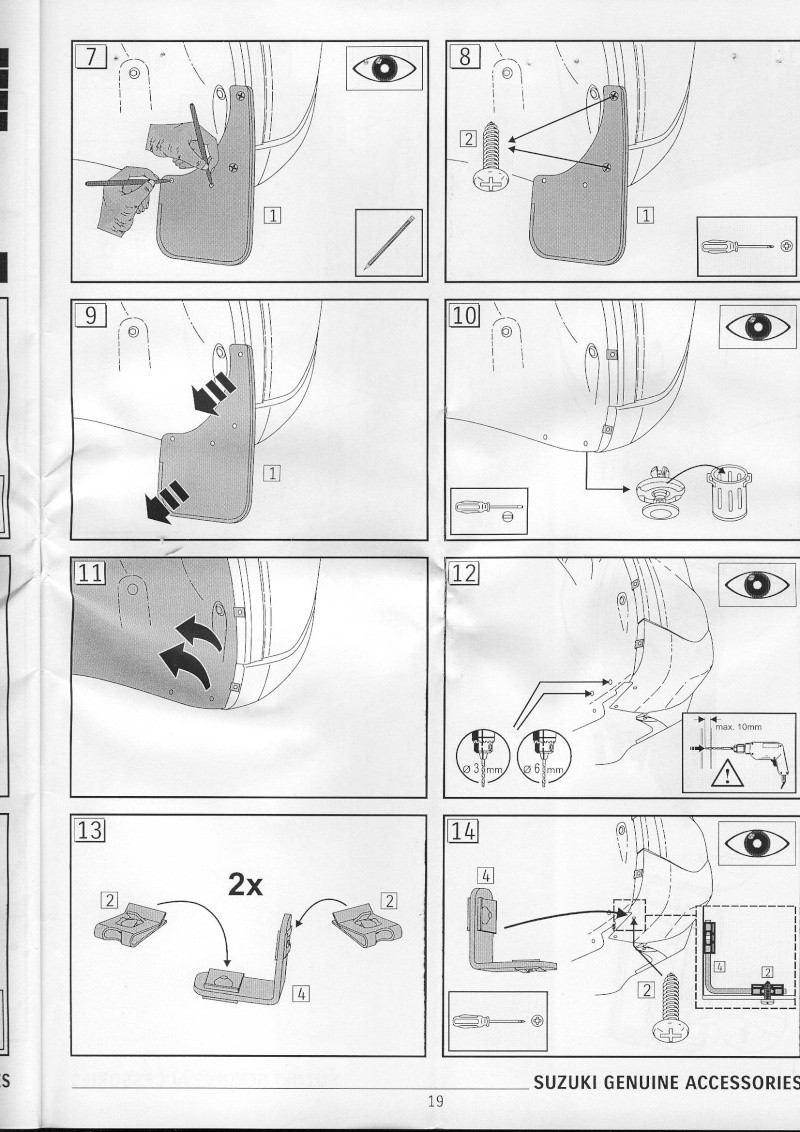 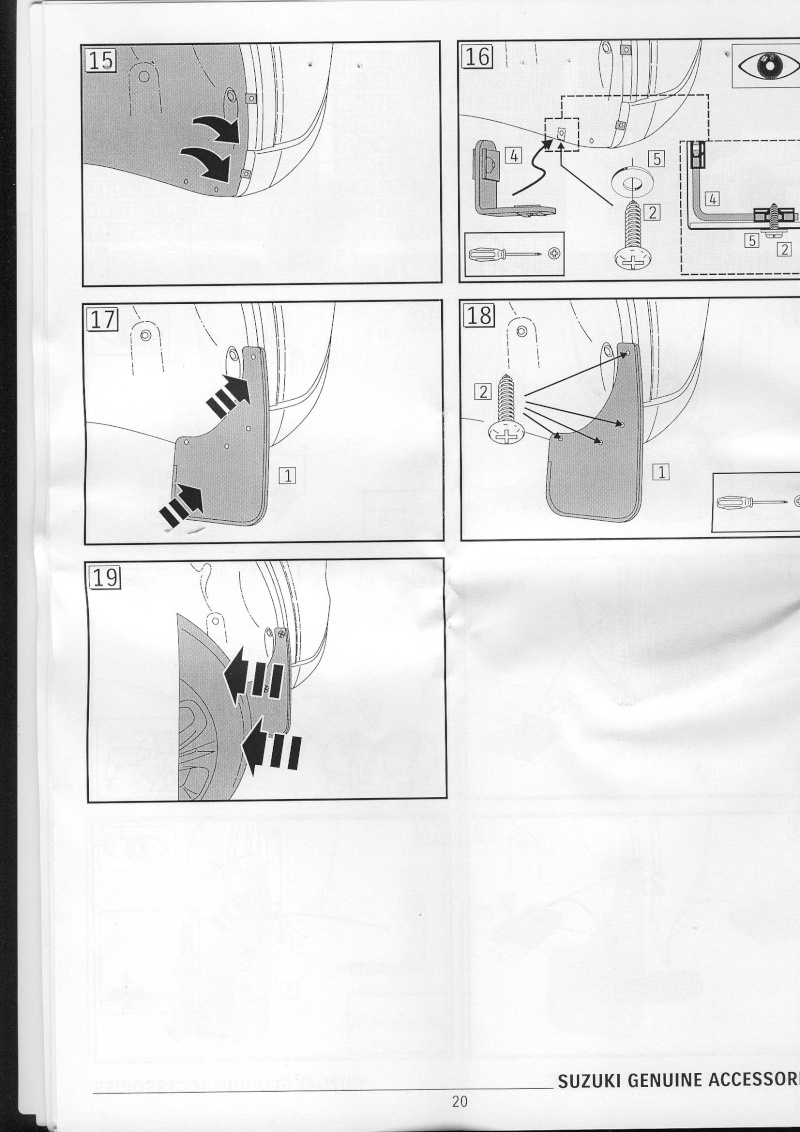 The more observant of you will notice that the page number jumps from 1 to 16 but the other 15 pages are the same thing in multiple languages, and nanny stuff like "check you have all the stuff you need", and "be careful"

Cool - thanks for the instructions Plunet

Should take me most of a day, when people say it's a quick install I'll probably join Mr. Grumpy in taking most of the day to get the actual install complete. I enjoy doing it, just take me a long time.

Hadus wrote:Hi Karl, did you ever get the mud flaps fitted?......

Sorry for not replying sooner Hadus, been ill the last 48hrs, glad to see you have had some detailed replys from other members

got a front set off e bay.fitted them without taking off the wheels .flexible set .three screws in each no problem.one sharp bradawl went thro the flaps and car as well.

I fitted the mud flaps at the weekend, both front and rear.

I found the rear flaps marginally more fiddly than the front ones, but that might have been because I started on the rear ones. The paper template for drilling the flaps is crucial as none of the markers on the flaps match the place where you need to drill the holes. It's a lot quicker to fit the 2nd one compared to the first, the 2nd one took me 15-20mins. So the stated time of 0.4hr per flap isn't too far off the mark if you know what you're doing. I took the wheels off both front and back, mainly because it was an opportunity to put a little grease on the wheel nuts - I agree with GS that you can do the front flaps without removing the wheel if you really wanted to.

On the rear, if you look carefully there's actually a slight depression in the plastic of the wheel arch where the hole needs to be drilled for the upper two mount points of the mud flap. The bit that is a little fiddly was mounting the angular brackets behind the wheel arch felt and then screwing through.

The front has no marker where the one hole needs to be drilled, and although the wheel archer liner is plastic rather than felt it wasn't too much hassle to move the liner out of the way to get the clips in place to accept the screws to secure the flaps.

I also need to thank this forum - I found it just before I got the new Vitara and PX'd my old Focus. I had the heads up on here that the vehicle jack wasn't being supplied with more recent Vitaras and I made sure that I kept hold of the jack from the Focus, which latches onto the jack point nice and securely and lifts the vehicle without any issue. So that was a useful saving.

Had my Vit for 2 weeks before the flexible flaps which were thrown in the deal arrived and were fitted. They make a considerable difference to the amount of crap being thrown up on the sides of the car in the wet. Well worth fitting

Did they come with instructions? Did you have to drill into the bodywork in anyway?

I fitted these as well. They look great and are easy to fit

Did they come with instructions? Did you have to drill into the bodywork in anyway?


Fronts use existing 3 push in fittings - no need to remove wheels , just put on full lock .
Rears require 3 holes to be drilled into plastic trim to accept self tapping screws , offer flaps up mark holes and drill . I did remove wheels and followed the instructions . All in took about 30 minutes .

Any chance of some pictures, i have genuine flexi ones at8vthe moment but fancy something more moulded but not as big as the genuine angular ones

Will take some photos tomorrow afternoon . 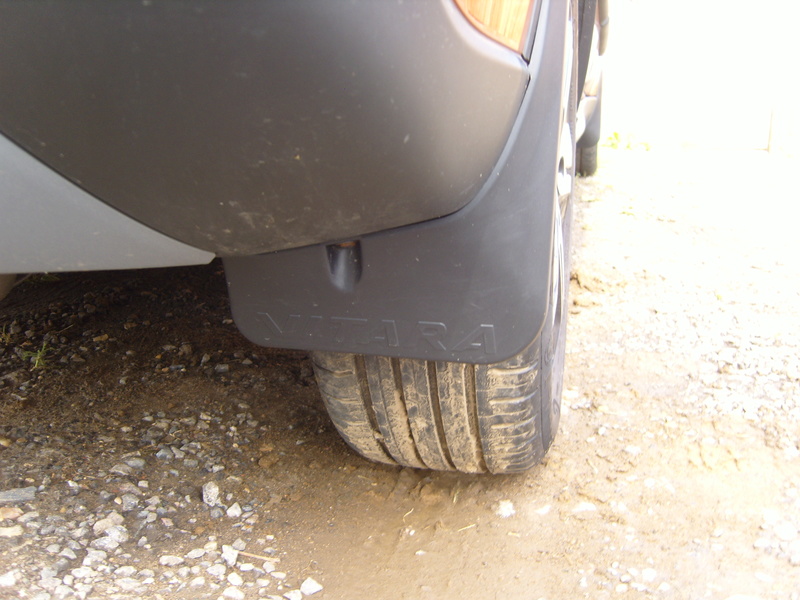 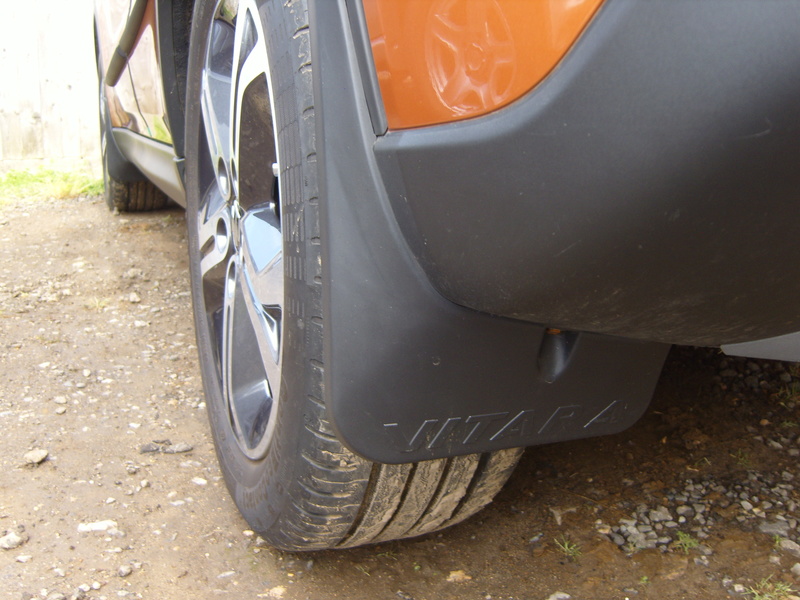 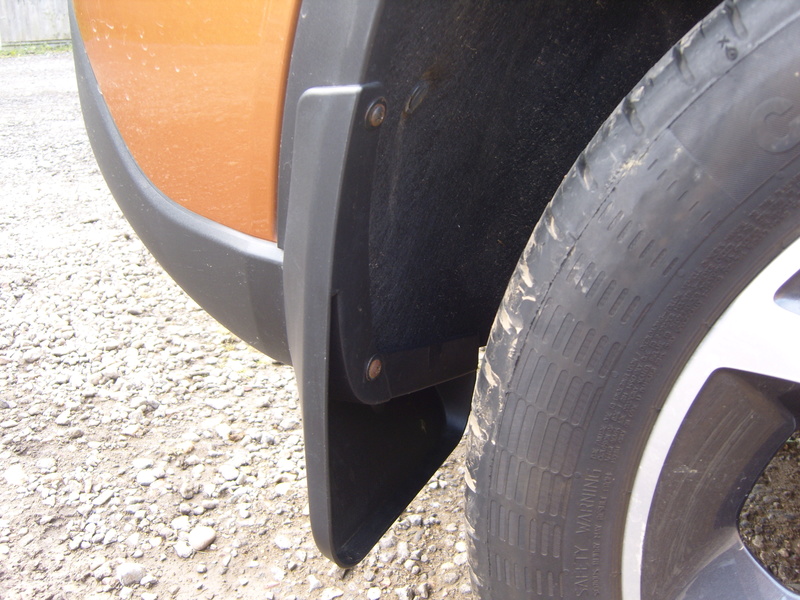 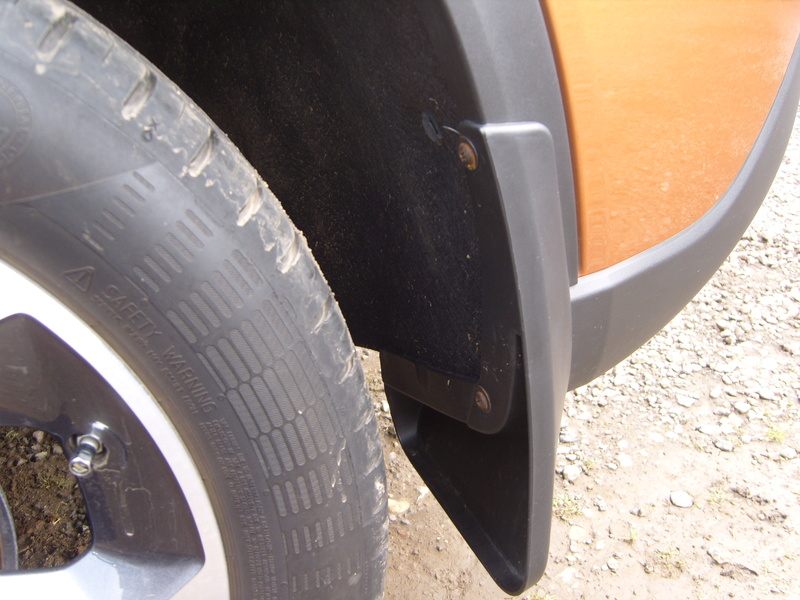 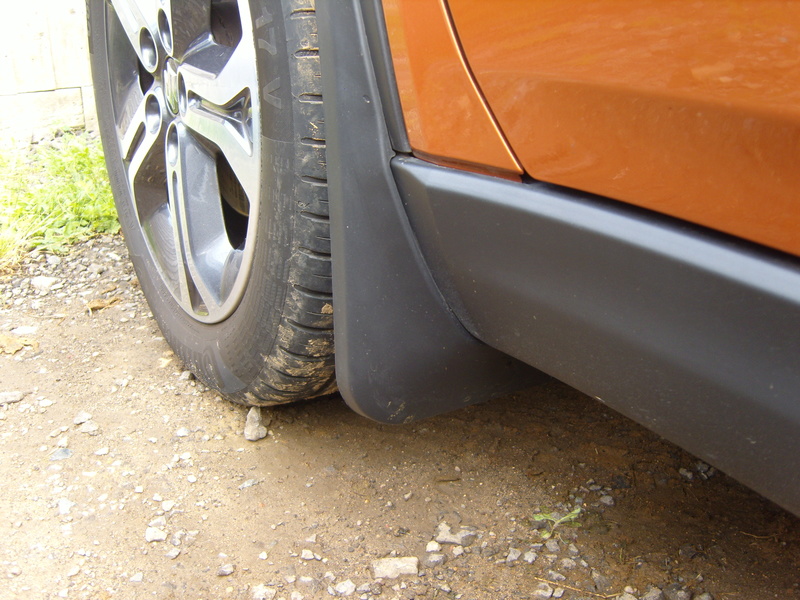 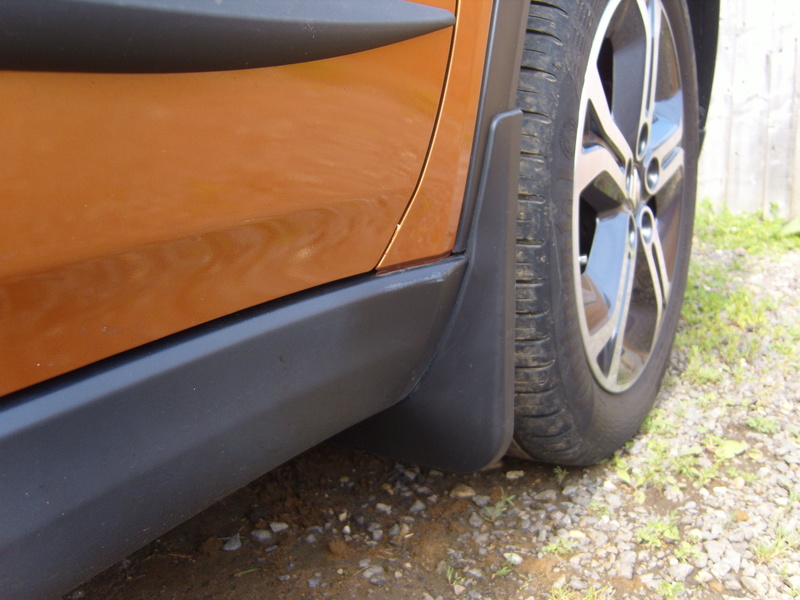 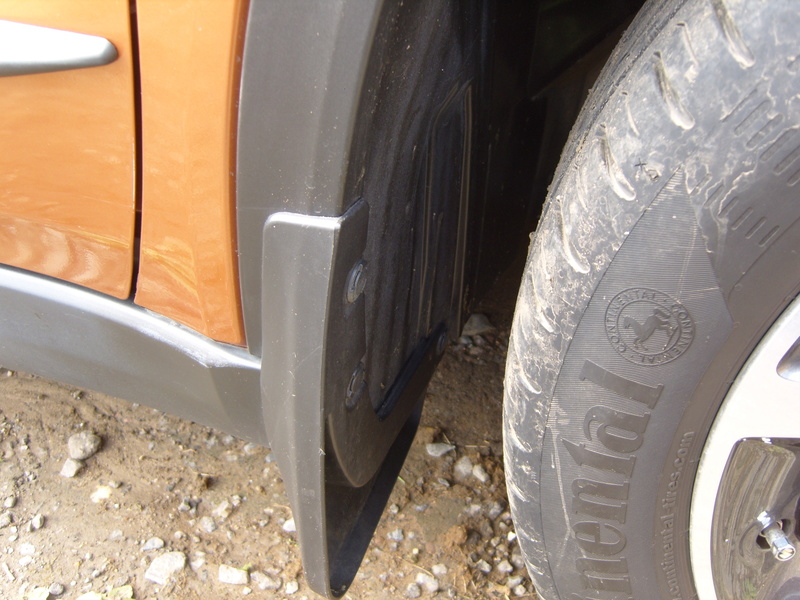 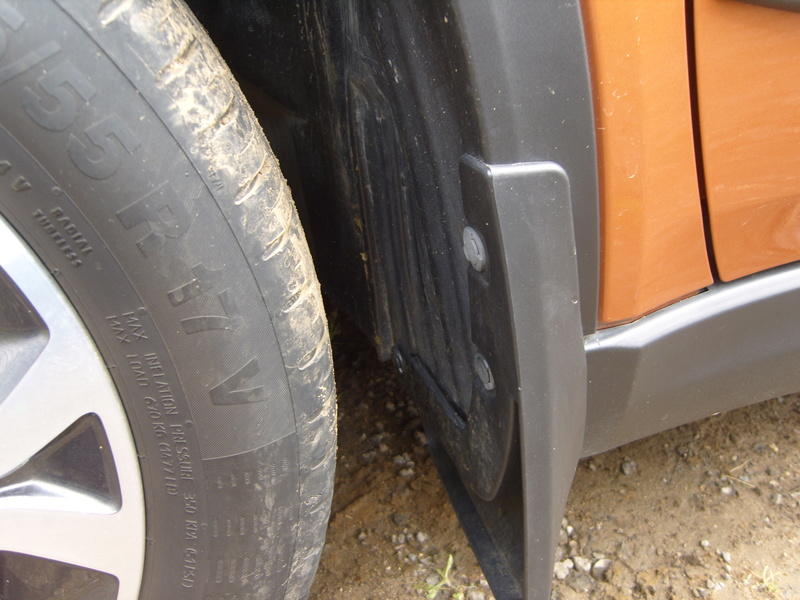 Thanks for the detailed pictures, they do look good and a set now on order
I like the way they follow the black trim rather than sit on the paintwork, had this in the past where the mudflaps have worn through the paintwork leaving unsightly marks should you decide to remove or change the mudflaps

Hi Karl , I was impressed in the way they are moulded for a snug fit against the existing plastics . One small point though is that the screw heads have quickly rusted , maybe extra rust protection before fitting would help - I will need to take off my rear wheels to remove them and re-paint them .

Thanks for the pictures nib... It does help a lot when we can see what is needed. And thanks for the heads-up on the wheel removal.

Ordered mine, so waiting for delivery!

Mine arrived about 10 days after ordering which I thought was good considering they came overseas .

Mine came in about two weeks as well!